My Fair Lady - is this appropriate for an Opera Gala Opening?

Despite being an artistic success, in some respects this was an acutely embarrassing event, sadly reflecting the current management's lack of commitment to opera, singers and their traditional audience. They continue to chase the theatrical dollar rather than respecting the art form their organisation is named for. Nobody minds some lighter pieces and the company does musicals and G&S as well as anyone. Yet this is an opera company and we paid for opera tickets and we deserve an opera for our season opening! It would be like going to the tennis and being told there would only be basketball playing! Enough of that.

Reg Livermore successfully played Henry Higgins, a character perhaps half his own age. I heard complaints that he sang too much while others said he sang too little, so he probably got the balance right! While no opera singer, his singing voice is quite pleasant, if a little nasal at times. His quip and quiddity on stage are superlative where he is the true professional. So too was his mother, Misses Higgins, played by another veteran, Nancye Hayes who was hilarious.
Eliza was Taryn Fiebig, a trained opera singer who, like everybody else, was seriously amplified. She played this ‘gift’ part beautifully including the accents. She was sensitive, vulnerable and yet self confident and independent by the end - with its ambiguous dénouement.
Colonel Pickering was played by Rhys McConnochie; Alfred Doolittle by Robert Grubb; Mrs Pearce by Adele Johnston. All the main and supporting roles were excellent. The chorus was also in fine form.

The production is original and engaging with a revolve to allow immediate scene changes. Clever detail allowed a glance at patrons inside the pub before it rotated further to become a street frontage where we heard some of the many pot-boilers of the score. The costumes were splendid, especially the Royal Ascot ladies in their grey, black and coral outfits with some extraordinary and enormous hats. Costumes by Roger Kirk, sets Richard Roberts, direction Stuart Maunder.

The two scenes in the Higgins residence in Wimpole Street were brilliantly created. We heard ‘The rain in Spain’ in the comfortable gentleman’s studio while the stunning entrance of the transformed Eliza (and her disappearance later on) occurred in an elegant entrance hall and stairway.

The orchestra played well under maestro Andrew Greene. The audience was appreciative and obligingly clapped along with the rum-tee-tum strains accompanying the curtain calls. The best performance, however, may have been the glorious full moon which rose 15 minutes before the show, clearly visible from the balcony, foyer and eastern walkways of the Opera House.
Comments by Andrew Byrne ..

Salute to the life of John Cargher. 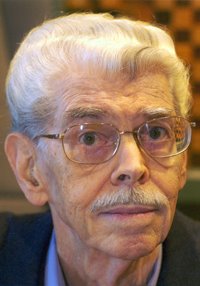 Australia has lost a great musical ambassador with the death of John Cargher on Wednesday 30 April 2008 at his home in Melbourne aged 89. He was a self-taught expert and critic on voices, composers, opera and classical music generally. His 'Singers of Renown' has been a Saturday afternoon fixture on ABC Radio for forty two years. I listened avidly to his broadcasts whenever I could and they often raised discussions between family and friends.

I only knew John from his occasional outings to the opera in Sydney and from numerous email exchanges. Many in Melbourne knew John personally from his involvement in record stores and theatrical exploits from 1951 when he arrived from London. Yet it was his broadcasting which took his softly spoken European accent and his personality into homes across Australia and beyond. His father Jacob was a rabbinical student in London where John was born. He was raised in Germany and Spain due to the illness and early death of his German mother. John then returned to London as a teenager to learn a trade and also attend operas and concerts in cheap seats.

John’s choice of items was always novel as were his eclectic commentaries between them. Even many non-opera people know John's signature tune, the 'nostalgia' duet from Il Tabarro with Mario del Monaco and Renata Tebaldi. This glorious and previously obscure piece of soaring Puccini is now probably the most often broadcast opera excerpt in the world after more than 2000 programs. Dame Joan Hammond also popularised a famous aria from this Puccini Trittico masterpiece "Oh mio babino caro".

Even up to recent weeks John was still making his pre-recorded weekly broadcasts, despite some repeats due to illness. On the week of his death the ABC replayed a program from the 1990s featuring Verdi’s opera Ernani with excerpts from the 78 era to the present day. While personally favouring the great baritone arias, he played a vastly varied selection from the last castrato to strained falsettos and booming basses. My own favourite ‘oddities’ were the delightfully drunk soprano song, the famous pussy-cat duet "Miaou" and the tone-deaf Florence Foster Jenkins. He avoided the temptation to showcase Callas, Sutherland and Pavarotti who he played infrequently. Other century greats he played included Gigli, Tucker, Di Stefano, Schmit, Warren, dal Monti, Ponselle, Muzio and Caruso. His historical notes often included how the Second World War affected careers and lives of individuals. He often mentioned the cantorial tradition and occasionally mentioned his Jewish roots.

John Cargher wrote numerous books popularising classical music and he was made a member of the Order of Australia for his services to music and the theatre. His wry wit, profound knowledge and occasional exposed mistake will always be remembered by this listener. Rest in peace. May his passing inspire others to such heights. He leaves his second wife, Robyn Walton and daughter Penelope.

In a French-inspired ‘geographic’ alpine production coming via London and Vienna this opera was raised from the relatively superficial to a level equal to anything the Met has done in my experience. The set flooring was made up of five or more overlapped maps of central Europe. Three corners peaked behind as if real mountains while one corner draped naturalistically into the orchestra pit. We had heard from the designer in the introduction that the military were the origin of all maps, obviously for strategic purposes.

Following the plot in which the alpine village is defending itself against the enemy, this extraordinary production opens with a blockade across the entire Met stage. The barrage consisted of furniture, wheeled carts, lumber, garden equipment, bric-a-brac and other household goods, all piled against each other. Most amusingly, a curtained wardrobe in the middle became the temporary refuge for the all-too-sensitive Marquise before it was wheeled off as her unceremonious exit. The next scene sees Marie doing the washing and ironing with bunks set up as a deserted army camp in the open.

Tonio’s arrival caused great mayhem as he was an outsider who had caught the eye of the Regiment’s daring, Marie who was already ‘promised’ to a company soldier when she was old enough. We were told in song that Tonio had risked his life to save Marie from falling to her death while picking flowers. A rare encore was performed by Mr Florez in his famous aria (‘Ah mes amis … Pour mon âme’). This turned the already incredible 9 high C’s into 18. And none was clipped or insubstantial. And most were on ‘the terrible vowel’, ‘a’ (ame, and flame). There was some banter between conductor and tenor during the initial applause and finally the bis was indicated on the conductor’s fingers. A colossal effort! Florez then received one of the few spontaneous standing ovations I have seen at the Met. A friend said it was the only spontaneous standing ovation he had seen in over 50 years of Met openings.

Peruvian tenor Juan Diego Florez is the darling of the opera world at present and has gone from strength to strength on the world stage adding Olympic-type records to his repertoire. These include the extra scene in Barbiere di Siviglia (others have attempted it but few succeeded so comprehensively). On this Met Gala he sang, danced and acted his way into the hearts (and pockets) of the elite of New York, many of whom had paid well over five hundred dollars for dinner, supper and premium tickets. His act 2 pleading aria was taken as slowly as I have heard it – moving, legato and effective dramatically, quite the opposite of the ‘rapid-fire’ act 1 aria with all the high C’s. Yet both speak of his love for Marie in different company and for different reasons. Both are successful.

Florez was in good company with the quirky and beautiful Natalie Dessay who did a captivating if unusual Lucia recently to great acclaim. In ‘Fille’, she took dramatic control initially as a coquettish tomboy, but revealed the most feminine of attributes in her performance. She took her time. At one point she mumbled incoherently for an age on stage, making a funny skit funnier. She bounced gracefully all over the stage and was carried aloft more than once for her phenomenally difficult cadenzas. Singing a high E flat while being carried aloft must be unique. Dessay’s ‘Il faut partir’ was dramatically moving and vocally flawless.

Both lovers were aided by a fine natural comedian, Alessandro Corbelli as Suplice who ends up marrying the Marquise. He had sung Gianni Schicchi last year with great acclaim. Well known Broadway actress Marian Seldes played the Duchess of Krackenthorp with great aplomb. She partnered Angela Lansbury in Deuce last year.

Act two took place on the same set but with an entire ballroom floor positioned diagonally across the stage. It was wedged up from the existing stage floor with (you-guessed-it) rolled up maps! The formal entrance, windows, pictures, fireplace and servants’ door were all hollow black frames. Stage left was a grand piano used for the famous singing lesson scene - and actually played by Ms Palmer as she coached Marie in a genteel song which always seemed to have a rhythmic, regimental second subject. The Met chorus made up a brilliant band of soldiers (see photographs of uniform on web site) and in the second act a ludicrous bunch of geriatric invitees for the arranged marriage (initially minus groom, then minus bride as well!).

This clever production contained more small comic details than one could possibly write about in a review. At one point early in the opera the townsfolk sing to the Madonna to save them from the advancing enemy. Momentarily the haughty Marquise thinks they are singing to her! The soldiers’ rescue comes in the form of a mechanised army tank rolling onto stage right, machinery sound effects and all! Tonio sang atop the tank as if in a war zone. While the French dialogue had been rewritten it all seemed perfectly attuned to the story. Also, it occasionally broke into English, each time to comic effect.

At the end there was a phenomenal ovation. The crowds screamed for Mr Florez and his paramour. Each time they took a bow it sounded like the stadium crowd roaring over a winning goal.

This may be the most exciting opera performance I have seen since the Sutherland days. I wrote later that night on the internet that the notices should be on the FRONT pages of the papers - and I was right! [see New York Times 23 April]
Comments by Andrew Byrne ..