This opera was up-staged to some extent by Mr Blaine in his huge water bubble in front of the opera house. The entire quadrangle was filled with people and a out-door screen set up for the spectacle of seeing a fellow citizen almost drown. Intermission saw hundreds more craning from every vantage to take a glimpse of the magnified image of Mr Blaine. Apparently he broke the submersion record but not the breath-holding one (which may be held by Monserrat Caballe).

This Met run has been subject of much discussion. Marcello Giordani had pulled out some weeks ago and Cavaradossi was to be played by Franco Farina. The great draw-card was still Ms Voigt whose return to the stage last year, slim and post operative was also of great interest.

I have never heard so much male "wobble" on stage as in this first act. Three veterans were guilty of this rather major vocal sin. For Plishka and Morris there are compensations but for Farina there were none as he sang badly for the first two acts. He belted out his music in the most unfortunate manner such that I felt people around me cringing, as I was. Farina forced, bleated and crooned his way throughout the first act in a most unseemly and tasteless manner. He was quite loud and sang on pitch and that seems to be enough for some people. There was some respite in Act III when he produced some much awaited musical magic and 'dolcezza'. 'E lucevan le stelle' was creditable, despite a falsetto diminuendo, while the duet singing 'worked', including the unaccompanied 'triumph' declamation. Perhaps he was more relaxed by this time of the proceedings.

Voigt received a polite ovation even before she sang an aria. Her Act I performance was just fine and in Act II she surpassed herself in both the 'Vissi d'arte' and its drama. Voigt took the opportunity to stab Scarpia on two occasions and he took several bars longer than usual to die in Act II. Farina's 'Vittoria' section was on key and large but lacked any beauty. More 'cringe' music.

Morris sang strongly but his persistent beat is off-putting and ugly. His 'Te deum' scene was adequate. Some would have preferred his act three.

I am pleased that Carlo Rizzi did not try to put his own stamp on the music. His tempi were classical and sympathetic. His orchestra members know what they are doing - with prominent low woodwinds and brass as Puccini mandated.

Not a high point of opera going for me. But an opportunity for a new audience to see the magnificent Zeffirelli production. Just to be a bit picky about an otherwise splendid 'realistic' rendition, I still don't know why Baron Scarpia has a flimsy little single bed in his chamber (I don't recall it being used), nor is it clear why Angelotti is so well dressed after months in jail. The alter portrait would appear to lack the detail to recognise a face or even to tell if the woman is blond, as required in the libretto.

New York streets were in chaos after the opera due to the added spectacle, huge crowds, traffic, closed lanes on Broadway, ambulance and fire trucks to boot. I was pleased to be on foot.

New Yorkers who were not there missed a treat this weekend. Two of the three Trittico operas were great value at $30 per seat. In the small but adequate Danny Kaye hall we heard two fully staged works Puccini would have been proud of. Il Tabarro was set traditionally with most of the stage being a sideways barge on the Seine and the Paris skyline horizon of dusk beyond and a huge full moon.

The production of Schicchi was unique and original in several ways. Making a boon of the small stage, somebody had the brilliant idea of 'parking' Buoso's body within the frame of an old portrait up on a mantle (where it slipped on cue with dictation of the new will!). Additionally, rather than the skyline of Fiorenze, we have baby dolls' houses near the foot lights including many 'rooms with views' as well as Brunelleschi's Duomo, Santa Croce, Piazza della Signoria and Tower of Giotto.

As most readers know, the Trittico can be a difficult to mount as a Ring opera. Each is a gem of the theatre and nobody should have been disappointed at the members of the Mannes Opera, conducted by Joseph Colaneri, directed by Laura Alley on sets designed by Roger Hanna.

All twenty or more singers were excellent but stand-out performances came from Vira Slywotzky as Giorgetta; Young Joo An as Michele (and doctor/notary in Schicchi); Yonghoon Lee as Luigi; Andrew Ahlquist as the street singer; Chee Shen Tan as Rinuccio; Marcelo Guzzo as Schcchi; Sookyung Ahn as Lauretta.

The orchestra was strong, balanced and well led. The acoustics and size of the hall produced one of the loudest and most immediate opera experiences I have even had. Goose bumps all over on several occasions - more than the last three full operas at the Met, not that such comparisons are fair.

Congratulations to this small company. Professional standards at amateur prices.

The Met Rodelinda is worth the price, if just for the beautiful sets. And remarkably, there were tickets available at most price ranges on the night. The first scene sees Queen Rodelinda and her young son locked up in their magnificent palace bedroom. Next, released from her chains, the entire stage rolls to the left, revealing the palace garden. It contains the family cenotaphs including one for her recently departed and presumed dead husband, Bertarido (played by Andreas Scholl, counter-tenor). The stage rolls on even further and we see a full sized stables, resident horse included. After a scene back in the garden, we find ourselves in the most magnificent library with six segmented galleries, mezzanine, skylights and panelled and serried shelves. A spiral staircase rises on the right with desk and chairs on the left. Yet another scene takes us to the bowels of the palace, secret corridor and all. It is here where the least likely part of this unlikely plot takes place as the imprisoned king accidentally stabs his friend with a weapon provided by his allies. Despite the injuries, both flee using the secret entrance.

I was surprised that Renée Fleming was paired with mezzo-soprano Stephanie Blythe who has a magnificent, velvet and very large voice. The opera does not contain duets or concerted singing in which such talents can combine such as Sutherland and Horne used to. Yet both women did shine individually, with a final magnificent tour de force 'resolution' aria by Fleming including a scale up to a stratospheric height. Sadly several of the patrons sitting near me had gone home by then.

I am never a fan of males singing in the soprano register (unless it is David Daniels) but I know I am in the minority. Scholl was extremely well received while the other men also sang creditably, especially John Relyea. The orchestra was in fine form under Maestro Summers who played harpsichord while at the podium. At times he seemed to have his left hand still on the keyboard(s) while raising the baton with his right to direct the orchestra.

The story is as unlikely as any opera plot. Bernheimer in his review apparently called usurper Grimoaldo the "nemesis on the premises". I don't know why the program gives the title "Regina de' Longobardi" for Milan's queen. Also, I have never seen so much surgery on stage! It was like a trauma ward. There was a bound hand wound and an apparent laparotomy. At least in Forza the battlefield surgery happens off-stage.

Like Partenope, the opera may seem long and difficult to some. I would not mind if it remained a museum piece, resurrected occasionally by specialist institutions. However, 'rescue' for such a work is at hand by using a clever production along with exemplary singing as in this case. Handel experts may disagree, but to my ear, the opera lacks an immortal show-stopper. Rinado has 'Lascia, io piango', Alcina: 'Tornami a vagghagia' (Alcina); Semele with three such (Oh sleep; Iris hence; Where e're); Caesar has its arias and violin exhibition; Xerxes its 'Largo'. That said, Rodelinda has a plethora of delightful and varied music from all singers and orchestra and is more than a mere museum piece. There are many repeated refrains which could be cut back, making the long evening slightly shorter. I only recall one real duet in the whole piece, but it is worth the wait.

Curtain calls saw the crowds go wild - and honour was satisfied in every respect - but I will not be back in a hurry. While it is a privilege to see an old work done so well - like the Mesopotamian wing at the Metropolitan Museum - essential historically - but I don't want to revisit all that often.

Met Rigoletto. Gavanelli trumphs. Water-sphere man a side show - only in New York!

This was a welcome surprise in the middle of a month of opera in New York. I had not heard Aronica or Gavanelli before but they were both magnificent artists with special qualities to savour. Ms Amsellem was also interesting, possessed of a strong, highly placed, pure soprano voice. She took the penultimate E flat in 'Si, vendetta' but avoided the high options at the end of the quartet and storm scene. 'Caro nome' was sung tastefully, ending with a long, accurate trill.

In several places, notably the first act 'La maledizione' and the end of the tempest scene, the orchestra was too loud for the singers to be heard. Mr Aronica omitted his (optional) high note in the second act cabaletta as he is 'called to his love' (like most other tenors). "Quest'e quella" was excellent with a finely schooled chorus for the opening party scene.

"Cortigiani, vil razza" was a tour-de-force by Mr Gavanelli. The quality of his voice has a rich velvet reminiscent of Warren and a forte/piano approaching that of Milnes. The voice is very large but he uses the full range tastefully unlike many other on-off singers.

Fisch took the orchestra at nice paces with the above proviso on volume. He may forget he is conducting one of the largest opera orchestras in a hall with excellent acoustics.

The production is another Otto Schenk collaboration - beautiful and 'realistic', transporting one to an imagined past time in Mantua. Not a detail is spared . from bare winter vine strands on the roof balustrade to wild grass growing in the floor tile cracks away from the pallazzo. The last act, set in the outskirts is particularly clever, incorporating the river bank, wharf and hostellery. Even at the Met it seems impossible to avoid an audience gasping with recognition with 'La donna e mobile' . which was masterfully sung by Mr Aronica with a marvellous finale scene in-the-sack. His finale exclamation was little less than magnificent, earning a deserved ovation from the demanding Met audience. 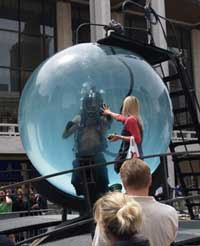 (Added side-show was David Blaine in his sphere of water next to the Lincoln Centre fountain - WEIRD!!).