Many thanks for keeping us up to date on what’s been happening – we are sorry we missed Mr Bonynge’s birthday bash but unfortunately we were OS. No music or opera, but several galleries – the Huntington (great collection of portraits by Reynolds, Gainsborough, Romney, et al.), the Getty, and LACMA (LA County Museum of Art, which has a major collection including several Rembrandts).

Mlle Brun (the former Angela Edwards, who sang for Mr Bonynge in the Auber and Thomas) has been appearing at St Paul’s College with her husband Julian in this year’s Victoriana season – unfortunately not accompanied by me. I would have given my eye teeth to have done it but was overseas for part of the season this year. A young Beardsley-esque pianist called Daniel Ward, in College after studying with Gerard Williams, played brilliantly.

After last year’s Queen of Night (Der Hölle Rache) followed by the Ride of the Valkyries, the powers that be managed to put together a slightly shortened version of Lucia’s Mad Scene, beginning with a very creditable “D’immenso giubilo” (helpfully translated as something like “With jolly minstrelsy...” sung by the small but enthusiastic ensemble of wedding guests, followed by a dramatic announcement from the kitchen door by Raimondo, to which the chorus replied, “What hath happened??” There followed Angela’s entrance in bloodstained dress through the kitchen door, bravura dramatics and then thrilling coloratura singing.

Subtle dramaturgical elements to assist the audience’s understanding were helpfully included. As Lucia chased the elusive flute runs, a canary was hung from a fishing rod for her to chase. When she caught it, it was found to contain a party popper which unfortunately exploded. There was some business with balloons which was reminiscent of Charles Chaplin and the Lohengrin Prelude in “The Great Dictator”. During the cabaletta “Spargi d’amaro pianto” she despatched the balloons one-by-one with a pin, and then each of the singers with a dagger! By the concluding high E flat, the stage was littered with bloodied corpses. The final coup-de-grace was administered by Raimondo, in this production a Franciscan friar, who stabbed Lucia before removing his cowl to reveal his mask as the phantom of the opera.

Written by Bill Brooks who has performed in the Victoriana festivities regularly for over twenty years. 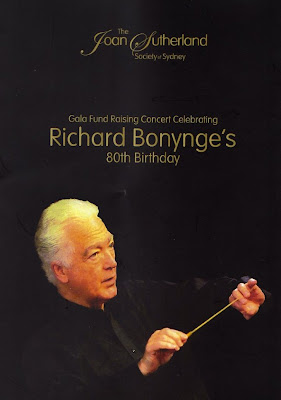 It was a pleasure to hear 20 or more fine artists performing in concerted operatic pieces in this delightful 1250-seat auditorium at Wynyard in the city. The carefully chosen program was skillfully introduced by Moffatt Oxenbould. It involved some famous pieces as well as some quite obscure works, parallel to Mr Bonynge’s own career. There were six duets between female voices (and none was from Norma or Rossini’s Semiramide!) along with numerous trios and quartets. Each was masterfully accompanied by Sharolyn Kimmorley on a concert grand piano.

Most impressive of the evening perhaps was last, the finale from Faust, with Daniel Sumegi, Rosamund Illing and David Corcoran. It received a rapturous response from the enthusiastic audience.

The bass/baritone duet Suoni la tromba from I Puritani (and its entire preceding scena) with John Wegner and Daniel Sumegi also brought the house down. Hearing it from two such talented singers made one realise why it almost caused a riot when first performed in Paris. I had goose bumps on my heels! Something happened at the very end when neither singer went up to the high tonic note, even though both are capable of it – nothing lost, it was still magnificent!

Ms Cullen, in her Aida duet with Ms Aivale Cole, showed that she is an imposing, even incomparable Amneris, just as Ms Cole makes an excellent young dramatic Aida.

Fiona Janes and Ms Cole sang from Meyerbeer’s early opera Semiramide Reconosciuta ‘Ella e la fiamma mia’ . To my ear it was as Rossinian as Rossini, written when Meyerbeer was 28, almost 20 years before Huguenots and over 40 years prior to his final mature work, L’Africaine. It was another charming pearl in this enjoyable recital.

Other prominent artists were Jose Carbo, Amelia Farrugia, Emma Matthews and Catherine Carby amongst many others.

As the official party entered the hall after interval Mr Bonynge received a five minute standing ovation from the doting audience. He sat next to Bob Hawke in the first half. Margaret Whitlam, Megan Evans, Malcolm Donnelly and Lauris Elms were also present, along with many other admirers of the maestro.

The evening’s performances made one wonder yet again at the rostering of singers by the national company. Their current Fanciulla del West is a case in point. The soprano and tenor leads acquitted themselves well … yet they are not in the class of the singers they replaced (Gasteen and O‘Neill) nor of their baritone colleague John Wegner. Indeed, there were some bigger and more exciting voices on show in this concert for Mr Bonynge’s birthday. Rosamund Illing has a magnificent voice and dramatic presence. It is a mystery as to why we have not heard her for some years with the national company. Also, Australian opera audiences, at least in NSW and Victoria, have been denied Ms Cullen’s unique artistry in place of competent but far less qualified singers.

It is yet another fault that the national company is apparently not honouring Mr Bonynge’s long and dedicated service to their company and to opera generally in this country. They could have used their otherwise empty hall on a Sunday, made a few dollars and showcased some young (and not so young) artists. But Opera Australia management seems content to continue purveying mediocre performances, often using untrained, amplified voices and thus ignoring their own company’s published mission statement.

So that readers can see the broad range of this wonderful concert I have listed the artists and their songs below. Some new contestants and Richard Bonynge himself will be at St Paul’s Church on Sunday 25th July for the final scholarship adjudication of the Joan Sutherland Society (at 2pm).

At the end we were addressed in a slightly long winded speech by Alan Jones and all were exhorted to join the Joan Sutherland Society. Governor Marie Bashir spoke succinctly and sincerely about the amazing career of Richard Bonynge who responded with brief but gushing gratitude to all for the ‘unexpected pleasure’ of the evening.

This evening's programme was created by Sharolyn Kimmorley & Moffatt Oxenbould

'A Little Night Music' at the Sydney Opera House. Too Little, Too Late.

While never really ‘mighty’, the Australian Opera company has done many highly satisfying productions over its long life since the 1950s. It has seen many of the world’s great singers on its stage. Such names include Blasi, Botha, Cole, Connell, Glossop, Horne, Jo, Kaash, Loringar, Marenzi, Marton, McIntyre, Milnes, Mitchell, Morris, O'Neill, Pavarotti, Resnick, Schorg, Sutherland, Te Kanawa, Terfel, Tourangeau, Vaness and Zschau. And many highly polished Australasian artists have formed the back-bone of the company (Allman, Austin, Begg, Carden, Cullen, Elkins, Gard, Janes, Martin, Pringle, Shanks, Smith and Summers to name just a few). Conductors, directors, designers and others have also often been of the highest calibre.

In contrast, this year’s opera opening was an inauspicious cold Monday evening performance of Sondheim’s A Little Night Music. It only has one very famous song, ‘Send in the Clowns’, which was ‘sung’ by exemplary actor Sigrid Thornton who was unfortunately unable to do it justice. In fact she did not so much sing as wheezed, croaked and talked her way through it. While her dramatic portrayal was consummate, at least one in ten of her words ‘cracked’ or ‘broke’ as a glottal or chest sound. Yet the crowds applauded, if unenthusiastically. The embarrassing best the ‘Herald’ critic could say of the song was: “it was fine”. At one of her entrances the famous actor slipped precariously up-stage from behind some curtains which obscured one half of the rear of the revolving stage. Ms Thornton was not the only cast member to fall victim to the fast revolve being used. This unimaginative but utilitarian set design was used throughout the performance.

I found little stage energy or theatrical panache from most major or minor characters. Anthony Warlow played the middle aged lawyer well and was probably the pick of the night. Nancye Hayes was also in her element as the world-weary and sceptical grandmother. Erica Lovell who played the granddaughter Frederika was also excellent.

The strong amplification did not prevent much of the very clever dialogue being lost. I was closer to the stage than at least half the audience so others may have missed even more. And there were no subtitles, another miscalculation by this misguided company management.

So this ‘opera’ company, whose mission statement mentions only opera and not operetta or musical theatre, opens their new season without an opera. Only 4 out of 15 cast members have had significant opera experience to my best knowledge. The company’s major asset, the chorus, was absent. Even the orchestra was at half strength and amplified, something they have fought against for years. I ran into a long-serving chorus member on the way out. He had been attending the symphony concert next door, having seen the Sondheim dress rehearsal that morning.

How have the mighty fallen!? How indeed.

PS – it may be that comparison with the current Broadway production (with Angela Lansbury, Catherine Zeta-Jones and Alexander Hanson) which I saw in March would be unfair … even the most minor character was full of dramatic energy, flair and talent (’look at me! I am here to entertain YOU!’) … unlike the Sydney version. I never thought I would see an Opera Australia performance where Kanen Breen had the best voice. Even though he only had about a dozen lines, his tenor voice was a reminder of the stark difference between a trained opera singer and a Broadway artist. And Breen is essentially a comprimario singer.

PPS - I have just heard some news about the West Side Story at the Sydney Casino Lyric Theatre and it is all good. And it appears to be cheaper than the Opera’s Broadway digression in what is probably a rather higher calibre show all-in-all. But it would be reckless of me to advise opera patrons to save their money and spend it on the other side of town. Parking is probably cheaper; there are Sunday matinees; there is a chorus (dancing) and there are many toe-tapping melodies to drive the blues away ... which is what the theatre is all about, isn’t it?