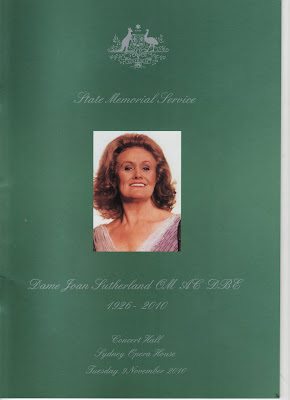 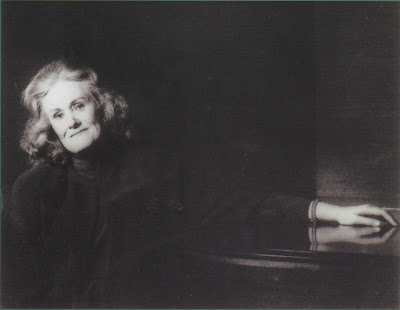 This was a moving and appropriate tribute to our departed diva. The speeches were all genuine and heart-felt - from Julia Gillard, Adam Bonynge, Moffatt Oxenbould and Marie Bashir. The host was Adrian Collette of Opera Australia.

In the assembled chorus I recognised Ken Collins, Joan Carden, Anson Austin, Don Shanks, Bob Gard, Paul Ferris, Ros Illing, Henri Wilden, Jennifer McGregor, Amelia Farrugia and numerous familiar faces who may have been former chorus ladies and gents (the company has now largely relocated for the Melbourne season). Bob Allman, Malcolm Donnelly and Cheryl Barker were in the audience. I also noted Elizabeth Allen, long serving chorus member, now retired, who was an old school friend of Joan Sutherland. There would have been others who I have forgotten and numerous people who I did not spy with my little eye.

The service was broadcast on national television and radio. The sound quality of Bell song and Parigi o Cara were top notch but then something happened and the system seemed to be below par for the Mad Scene and Borgia finale. I thought it was a little odd that they chose Va Pensiero from Nabucco, an opera Sutherland (wisely) never sang in.

While there were no titles for the Concert Hall projections, I was pleased to see that the broadcast did include sub-titles for the clips of Sutherland’s singing. This is so very important for the novice … as well as some of us more seasoned folk I suspect.

Yes, what days they were. Sydney was privileged to hear Sutherland’s middle and late career with a (then) good quality opera company. We also heard her great career retirement extravaganza which was the full-fledged French grand opera, Les Huguenots or the ‘night of seven stars’. Few provincial opera companies then or now would be able to muster such talents as Grant, Johnston, Austin, Pringle, Wegener, Thane, Sutherland. It was one of the saddest night of my life - of course I was just sorry for myself!

From about 1975 to 1990 I recall each year opening the new season’s brochure and being excited to read what opera(s) Sutherland and Bonynge would be doing next and who would sing with them. While the latter were not always as great, they were mostly superior singers to the standard we hear today at the Sydney Opera House. And each rose to the very substantial occasion, giving us all world class goose bumps year after year. I think that Lucrezia Borgia was her best, but comparisons may be odious. She did two seasons of it if I recall correctly. I have been listening to the YouTube video of the finale aria – a true coup-de-force to end an opera!

During those years we also heard Il Trovatore, Suor Angelica, Der Fledermaus, Lakme, Merry Widow, La Traviata, Otello, Tales of Hoffman, Lucia di Lammamoor, Norma, I Puritani, Semiramide, I Masnadieri, Huguenots, Dialogue of the Carmelites and Idomeneo (only the last two were disappointments for me - but I have very narrow opera tastes). The Lucia, Norma and Traviata were indeed immortal performances. She also did a Rigoletto in the Domain one year: I was in raptures.

It is hard to convey to a younger generation just what it meant when it was a ‘Sutherland night’ at the theatre. As well as the soprano, there were higher ‘gears’ for just about everybody in the place from the bar staff to the orchestra … not to mention that amazing buzz amongst the audience, some of whose members might have even heard Nellie Melba (albeit also past HER prime).

I recall that each year when La Stupenda commenced singing we may have wondered if she was still up to it. There was often a wobble and flutter and even some flat sounds. She definitely took some time to warm up but by the end of the initial recitative or aria she would launch into the most miraculous high-performance and unique vocal delivery for the remainder. It was no longer a “tsunami” of sound, just a large, moving, dancing vocalism which dazzled through every range of emotion, rhythm and texture. We shall not see or hear the likes again.

JOAN SUTHERLAND - A PHYSIQUE TO MATCH THE VOICE OF THE CENTURY!
by Andrew Byrne (1994)

The aspirations of a nation were epitomised for two generations by the singing career of Joan Sutherland. Her consistent high artistic standards and dependability are rare in the history of opera and may be due in no small way to her staunch Scottish Australian upbringing in Sydney during the depression years.

Sutherland rarely cancelled due to illness. Many years ago, an Australian doctor who happily advised against tonsillectomy, commented on the perfection of her vocal cords. She suffered throat and sinus infections in the 1950s said to be due to London smog. Regular antral lavages were done by ENT consultant Mr Ivor Griffiths. After her first Glyndebourne season, she was advised to have her teeth capped. This she describes as a long, painful series of treatments. In the 1960s, she was stricken with backache which the headlines exaggerated to 'SOPRANO PARALYSED!'.

Although always a big woman, she basically has a 'solid constitution'. She attempted weight reduction on occasions. On her yearly tours of Australia in the 1980s rumours often arose that Sutherland had influenza. These were confirmed by all who heard her speak, but when she sang, as she nearly always did, only her most exacting fans could tell that she was below par. I recall on one such night overhearing her say "Gooty gooty gubdrops!" when told that it was another full house. Despite her obvious rhinitis, she sang the evil heroine Lucrezia Borgia to an appreciative audience.

Only once in sixteen years did she cancel a performance at the Sydney Opera House. The final performances of Norma were taken over by a very competent local understudy when the diseased diva declined. She was once let down by a union dispute in Melbourne, and on another occasion, she sang La Traviata at 12 hours notice due to the sickness of several colleagues in Mozart's Idomeneo.

Having gone to London in 1951 aged 25 to study singing, she was assigned progressively more demanding dramatic rôles until dazzling the opera world with her Lucia di Lammermoor by Donizetti at Covent Garden in 1959. She was suddenly in demand all over the world. A wise contract at this period took her over the English Channel to record a bracket of opera scenes with Nello Santi conducting the Paris Conservatoire Orchestra. Although she has made many fine recordings, some believe this accessional piece to be her most outstanding legacy. It featured the fountain aria from act one as well as the celebrated mad scene from Lucia. It also contained three rarely performed works brought from obscurity by earlier 'microgroove' recordings of the great Maria Callas who shared some repertoire, but little else with Joan Sutherland. The full recording session is now available on budget CD and displays pure crystal coloratura.

Sutherland next performed Verdi's La Traviata to great acclaim. Bellini's Norma was another of her great triumphs. With Bonynge's encouragement, she embraced the lesser known Bellini operas in turn: La Sonnambula, Beatrice di Tenda and I Puritani. Her Lucia was heard in many great opera houses including Milan, Amsterdam, Vienna, Palermo, Barcelona, New York and Buenos Aires. Everywhere but Australia.

The year 1965 saw a grand return tour to all the Australian capitals with the greatest opera season since the Melba-Williamson days of 1930. They brought the unknown tenor Luciano Pavarotti whom Bonynge had auditioned for the tour. The company sang Rigoletto, Lucia, Semiramide, Faust, La Sonnambula and La Traviata, all to great acclaim.

The couple did not return again until 1974 with Offenbach's Tales of Hoffmann in Sydney, a sell-out recital in Melbourne and an Australia-wide broadcast. This saw the beginning of annual tours of this country and setting up of home in Australia where son, Adam, his English wife and young family had also settled. For a further sixteen years she sang regularly with The Australian Opera and performed recitals in Perth, Brisbane, Adelaide and New Zealand while continuing a busy international schedule.

The presence of Sutherland and Bonynge in Australian musical life has been a catalyst for others artists to achieve greater artistic heights. Usually with Bonynge conducting, Sutherland performed a variety of works in Melbourne, Sydney, Adelaide and Brisbane in the theatre, concert hall and even the open air park's concerts. These ranged from The Merry Widow to Verdi's Otello and Rigoletto, modern French repertoire with Poulenc's The Dialogue of the Carmelite's, Puccini's Suor Angelica, Donizetti's Lucrezia Borgia and Lucia di Lammermoor, always her pièce de résistance.

She continued creating new rôles and recordings until the late 1980s, her last great new rôle being Anne Boleyn by Donizetti. This rare work contains the first ever 'mad scene', concluding with Sutherland's trade-mark: a spectacular vocal display and final high note soaring above the combined sounds of the chorus and orchestra.

Like her debut performance in Lucia over thirty years earlier, her final operatic stage appearance created a sensation. Les Huguenots has seven starring rôles which allowed the maximum number of her colleagues to share the stage for this most memorable season. On the final night, she sang to a theatre full of devoted fans, some of whom had waited all night for the few cheap seats available in the Sydney Opera House. At the final curtain, the audience gave a tumultuous reception and the company put on a fireworks display inside the theatre all of which was broadcast across the world. An era ended with a simple encore of Bonynge accompanying Sutherland in Home Sweet Home.

Sutherland's remarkable career has lessons for us all. She schooled her god-given gift, developing it to the unique instrument that has brought such pleasure for so long. Although having her share of illness and personal problems, she triumphed over adversity, as ever in the theatre, the show must go on!

Written in 1994. Dr Andrew Byrne is a general practitioner in Redfern, NSW.